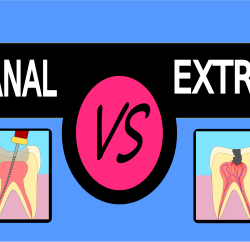 So, you have a big cavity and fillings aren’t an option any more, or you fractured your tooth and it hurts a lot. At this point your dentist might offer you two options: Root Canal or Extraction. If you’re reading this, you probably haven’t made up your mind about which to choose.

Spoiler: It’s always better to keep your natural teeth as long as possible.  We know that it hurts a lot, but you won’t chop off an arm just because it hurts, right? Why would you do the same to your teeth?

Both Root Canals and Extractions have their pros and cons. Here we will explain them in detail so you can understand why a root canal is better than an extraction.

When choosing between a root canal and an extraction, there are several aspects to take into account:

Pain during and after the procedure

Extraction.You will be given anesthesia to reduce or maybe even not feel the pain at all, depending on the tooth’s location and shape of its roots.

But keep in mind that you are removing an entire tooth, so the pain after the procedure will be something serious to deal with.

Root Canal. Contrary to what pop culture says, root canals aren’t the soul-wrenching painful procedure that they used to be anymore. Over 20 years ago the FDA approved anesthetics that prevented your tooth from feeling pain at all, even though the popular culture has kept the idea as a common joke when talking about painful or uncomfortable situations. But this isn't true anymore,e’ve had patients falling asleep during a root canal!

After the procedure you might experience medium or slight inflammation, but nothing that the prescribed medicine your dentist will give you won’t be able to handle.

Extraction. You will have to take anti-inflammatory medicines and painkillers for several days, your diet will have to change for a couple of days, as well as a long list of precautions that your dentist will give you after the extraction.

You will need to wait a few weeks until your gum heals so you can start the restoration process.

Root Canal. You will be able to eat as soon as the numbness is gone, just taking care of not chewing something too hard or sticky on the root canal area.

Restoration can start on the very same appointment, if possible.

Extraction. If you’re dealing with a tooth that isn’t a wisdom tooth, your general dentist will most likely be able to perform the extraction himself or herself. Since no specialist is needed, the price will be lower than a root canal’s.

Extraction. Removing a tooth is simple, but replacing it definitely isn’t, and it’s not too cheap either. Now that you have a missing tooth you’re in a race against time to replace it in order to avoid undesirable consequences, and this means a big money inversion in a short amount of time.

A missing tooth can be replaced with an implant, a fixed bridge or a partial bridge. Depending on your situation, you could be paying a lot as a private patient or just co-payments because you have dental insurance, but you will definitely be paying more than if you had chosen to get a root canal done.

Root Canal. The restoration steps after a root canal are quite simple: You will need a post and a crown, sometimes even a crown lengthening, or maybe none of the above, depending on your tooth’s size.

Their pricing depend on whether you’re a private or insured patient and where you’re getting the job done, whether it’s in USA or outside the country, but overall the total amount will be lower than the cost of restoring an extracted tooth. 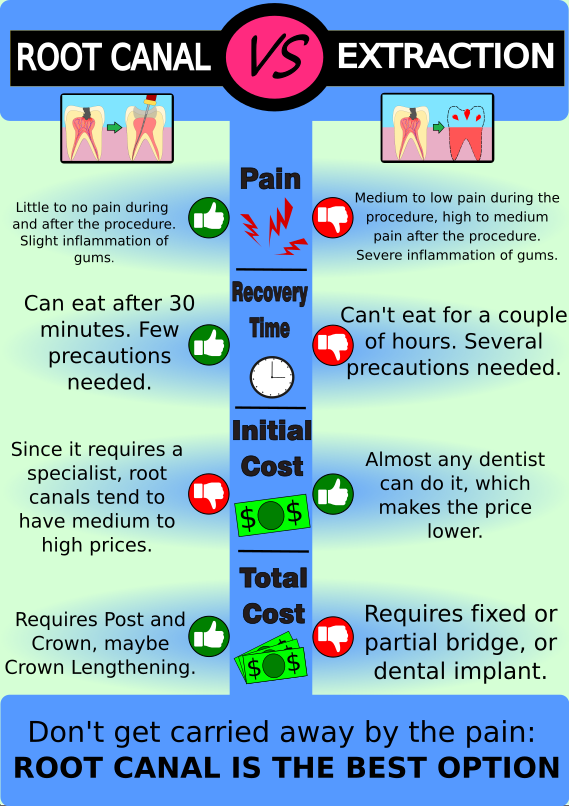 If you need a root canal or a dental extraction, you can call us at Dental Studio and schedule an appointment. We'll be glad to help!

If you have crooked teeth, you may feel insecure about your smile. However, with advancements in dental technology, …

Bad Habits to Avoid If You Want Healthy Teeth and Gums

Practicing bad oral habits can lead to several dental problems, such as tooth decay, cavities, and so on. …

How Stress May Affect Your Oral Health

A healthy diet is essential to maintaining good oral health. The foods and drinks you consume can affect …

Toothaches: Everything You Need To Know!

A toothache is a painful sensation that occurs in and around a tooth, generally as a result of …

Thank you for Submitting your request. Our Office will get back to you.